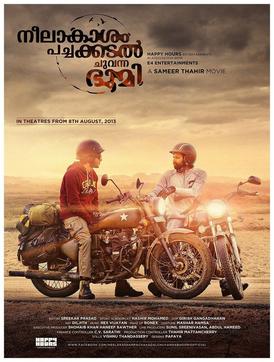 
“Neelakasham Pachakadal Chuvanna Bhoomi” is an imaginatively titled movie , Neelakasham depicting the start of the road trip , Pachakadal - the Puri sojourn and Chuvanna Bhoomi alluding to the naxalism and bloodshed in parts of East and North-East India,to the writer’s best guess. But the imagination has not run strong through the entirety of the script leaving it jaded in places and the end result is a watered down naadan version of  “The Motorcycle Diaries”. It’s a road trip movie braided together with the twines of love and friendship , interspersed with beads of unrelated anecdotes, each one shining with insight. Hashir Mohamed’s script though has a jagged ending, under developed side kick character and an unnecessary, unexplained murder in it. An intellectually subpar second fiddle who openly idolises the hero’s machismo looks less like male friendship and more like gay behaviour.  A good actor looked sadly wasted in such a stunted role.


The dialogue department has delivered a generous sprinkling of catchy one-liners like “My fate is my decisions”, that are sure to resonate with the audience. Delivered in Dulquer’s  baritone voice ,which seems to have got industry wide acceptance going by its repeated use in voice-overs in most of his recent movie outings , they entertain . Rex Vijayan’s music is lilting and jells with the movie, keeping the tempo upbeat through out.  The absolute delight of the movie is in its cinematography – Gireesh Gangadharan excites us with his visual treat of the rider and his bike in full glory! The bliss of wanderlust explodes beautifully onto the screen through his camera‘s lens-work. The goodness of the movie is topped off by expected yet commendable acting performances by Dulquer Salman and Sunny Wayne and the delicate beauty of Surja Bala .


The following good movies kept flashing in the writer’s mind while watching this movie:-

The Motorcycle Diaries – the bike and the wanderlust! Che keeps journaling throughout his journey in TMD and Dulquer keeps a very similar looking book handy for his sketches and musings. 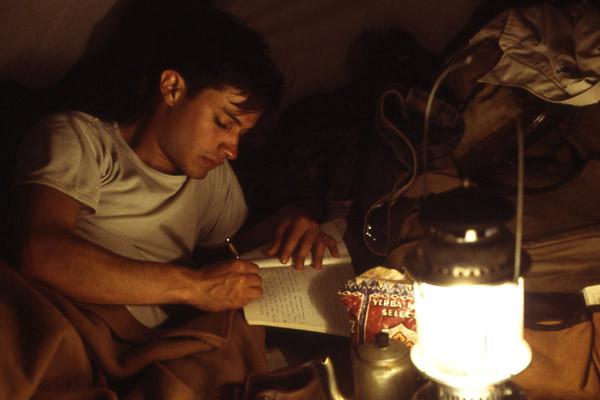 Swades – Jugaad which has become the rockstar of all things desi started becoming movie center piece material with this one. Couldn’t help chuckling out loud at the scooter-turned-rice-flour-machine for its sweet cockiness.

Into the Wild – That avid reader and adventurer called Chris McCandless came to mind the two times that Dulquer is shown reading a book, but our hero looked oh-so-not-interested in the book ;would someone please relieve him of it!? Did anyone catch the book title by the way? The journaling too repeats here .

On The Road – Nah. That movie was mindless in itself. Jack Kerouac turns in his grave as we speak .His book on idealistic beat generation kids was turned into a road show of irresponsible dunderheads .’Nuff said !

Do yourself a favour . Read Kerouac .

Edit : The gay reference is in bad taste and I apologize unconditionally. Didn't know any better back in 2013 when the post was first written, but here I am in 2019 making amends , not that I am much better now or anything.  I still complain about the under developed side kick though .
Posted by manoranjini at 10:51 PM

Hi.... You wrote well, regards. By the way did you noticed that books name? Am just seen a bit 'way down' but sumthng is there in front of dat. If u knw pls let me knw... Before a long time i have been planted a seed,but d situations and climate f life were too tough and very heated... May be that book will be a fertilizer or a rain for that seed to grow big... May be. If any suggestions abt any books, articles..... Pls kindly inform me at kparjun13@yahoo.in , with regards,hope,prayers,..... Arjun

The book name is long way down., its by Evan Mcgregor

Hey Anon , Thanks for sharing the book name. I hope the seeds grow into plants and before long , there's greenery all around !

Harisankar said...
This comment has been removed by the author.
3:30 PM

Hi you do write really well. Just watched NPCB and it really resonated with me. Yes, Kurudi was soo underutilized considering his potential. And it did look a bit gay at times.

Happened to stumble on the blog and the review while I was searching for the book which reccurs through the movie.Exceptionally well written review however I think it is quite unfair to compare classics with a contemporary Malayalam movie. While I do agree that there were unnecessary detours and the one dimensional characters, I was personally amazed that a Malayalam film chose biking and travel as the main theme. Very brave attempt. Discussions on the Gay factor of the sidekick is slightly absurd and calling him intellectually sub par is taking it too far. It's unfortunate that male friendship has to be categorised now as non gay and gay. I found the friendship portrayed quite genuine, a little rustic maybe but genuine.

Supriya Chauhan said...
This comment has been removed by a blog administrator.
9:17 PM