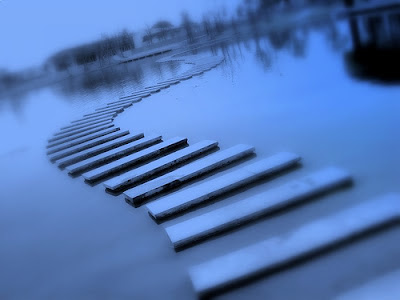 River Of Thoughts
---------------------------------------
A monotonous guitar note kept playing in an infinite loop in my thoughts rendering every thought of mine with a melancholy touch. I looked up at the blue expanse overhead and let the river of thoughts flow unhindered until they would quieten down on their own, for I hoped for some peace at the end of that flood. Sunlight beat down upon my face as I sat there on the low wall surrounding the garden, eyes fixed at an invisible focus above me through the clump of tree leaves.

They tried to bring me back from the madness and kept asking me to come back inside .They seemed concerned for me, but they wouldn’t understand even if I explained. The river has to flow its course; madness is to try to control it or worse, stop it. The river has a will of its own and it’s far beyond my will over my self. The sun, I will have to bear in order to gaze the sky in its eyes.

Birds twittered around me annoyingly; I wish they would stop disturbing me for their noise was drowning the guitar strums my thoughts played on. My breathing turned to heaving as the hot air got heavy and beads of sweat rolled down my forehead. I had to be patient and wait for the tide to roll over. Then I could go back inside into the cool comforts indoors, but not before that. I even wondered what the river was trying to say-but it spoke an alien tongue. I could gather familiar words here and there if I tried hard, but they weren’t coherent.
The river just ran on insanely, spitting condemn and roaring with anger. I feared it may boil over onto the banks and singe me; I hated that I had no control over it and that I just had to watch it flow, with trepidation, from its shores. I also hated its force and its utter unwillingness to obey. If it was up to me , that river would have flown peacefully ,kissing the sands and caressing the stones in its bed and just being pretty to look at like all those rivers are in the pictures, but my private river was turbulent and vicious, crushing the stones and the shells and constantly threatening the shores with menace. It was in a bad mood today, and I was waiting for it to calm down… waiting in the sun till the river ran its course....
[ Written under the influence of 'GoodBye Blue Sky-Pink Floyd'. ]

PS: The guitar finds repeated mention in this blog, cos I prolly am addicted to its sound and can’t think of any other instrument right now. It may well be a momentary love affair, like all others in my life too.

PPS: I have developed a sudden unexplainable liking for the semi-colon!

Posted by manoranjini at 1:06 PM