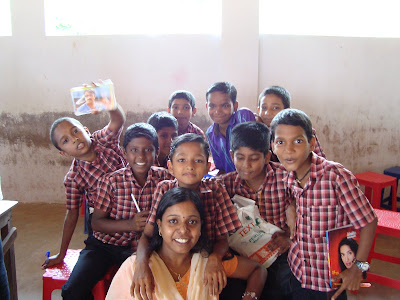 Your children are not your children. They are the sons and daughters of Life's longing for itself. -- Kahlil Gibran

It was to see this longing, and to reaffirm my faith in the purpose and beauty of life, that I decided to volunteer for the ‘Rural Reach Program’ sponsored by the company. As part of the program, a team of employees from the company visit a rural school, sometimes with high drop out rates, and try to reach out to the children, mostly from poor families. The target audience is the children from 5th, 6th and 7th classes who do not get much exposure to computers. There we tell them about the basics of computers and let them explore and use our laptops in an effort to get them interested and generally acquainted with computers.

My life was just turning around the same spot, and boringly so too. Blame it on the recession, the general work trends in the IT industry, marriage brouhaha, or whatever else; nothing seemed to expedite the recovery. That’s when I remembered about my forgotten quest for a purpose in life, around the time I read this in Abhi’s blog. That touched a chord… a very lazy, lethargic chord in me twanged feebly, enough to make me decide on giving up a lazy Saturday to meet a bunch of naughty, high-energy and absolutely adorable kids!

We had a program scheduled for 2.5 hours wherein we would tell them a bit about computers, show them some basic apps like Word and Paint, discuss about civic sense with them, a tiny li’l G.K quiz and then let them play games on our lappies. The kids were broken up into groups of ten and a group of ten 6th grade boys were assigned to me and my mate. No sooner had we opened the laptop than they started chattering away excitedly among themselves -

Thus started off our exciting interaction with these tiny bundles of energy, brimming with questions and at times, shooting very frank comments! They took turns typing their names in MS Word, slowly finding each alphabetic key, getting tensed when they typed something wrong, and egging each other on …As part of the Kerala government’s promotion of Linux and open source software for it’s IT education in schools, what little exposure they had had, was in Linux .It surprised me pleasantly when they asked me to give them TuxPaint .We had to make do with MS Paint though, but they were just too eager to lap it all up.

They had spotted the bright blue coloured gift kits we had brought for them in cartons, and I told them the truth when questioned about it. Big mistake! They kept shaking their heads in disbelief, and just wouldn’t take my word that it was for everyone and that the same gift would be given to everyone. Apparently, they had been subjected to differential treatment way too often to believe that they were all going to be treated to the same gift for once. But it helped me get the racket under control with a simple ,”Do you guys even want the gift?” ,to which they would promptly quieten down and get back to their chairs ,finger on lips and arms crossed over their chests .Did I tell you ,they were simply adorable !

The children had very good awareness when it came to civic senses and I did away with the entire preachy bit. Come games time, and you could see ten kids glued to my lappie ,an entangled mass of heads and arms in front of a glaring screen accompanied by unbelievable din .Needless to say ,I loved the mess and was right in the middle explaining the moves and showing them how to play .We took turns playing Pacman ,that old game I played at school when I was the same age ,and I humbly state the fact that I was the highest scorer in our bunch! So I was allowed by the kids to assist them while playing .Yea … We were comrades in arms and I handled the down and left arrows for them!

In no time, it was time for us to wind up but not before getting their feedback .They had to mark their feedback on a scale of 4 to 1, 4 being the highest. As I explained each question to them, they scurried to mark their response as soon as I told them what 4 stood for. That was kind of you, guys! The naughtiest one though would say “1” as he bent over his covered paper and marked four for me and looked back with a mischievous grin. They told me they loved the program and kept on asking me to return some day and teach them some more.
“Eni ennu varum?Adutha Saturday varumo ? ” [When will you come next? Will you come back next Saturday?]
I smiled “Yes”
The naughtiest one shook his head sadly,”Eni varilla,veruthe parayunnathanu ”
[You won’t come back, you are lying]
How many promises made to you have been broken, my child, for you to have that kind of sad sarcasm in you …?
I was heart broken, but smiled “Yes” again.

That is the saddest part of meeting children. You grow so fond of each other in such a short while that it invariably breaks your heart when it’s time to leave. They take leave in the hope that we will meet again soon, and as they wave goodbye to me happily, I have to smile over a broken heart because only I, of the two, know that we may never meet again. Our paths may not cross again, but may the learning and the fun of the whole experience inspire them to not drop out of school but to stay on and learn more. Each one of the kids I met has it in him/her to do well; I pray that life gives them a fair shot …

I come back from the program, my fascination for life, greatly replenished!!!

Footnote -
Dear God,
They are such talented children; please keep an eye out for them.

I second your prayers for those children. May God bless you as well

I'm sure thats the worthiest time of your life.

Been there done that... I'm fully with your feelings.

I wish & pray god to treat them well and provide equal opportunity.

The noblest thing that we can do is work for the society, for others...... I am waiting when I will be able to fill my dream of working for the people :)

@Sir- Thank you.Will definitely go back every chance I get..
@Kenneth-Thanks for the prayers.
@CM-It sure was a profound experience.
@Quest-Couldn't agree with you more.May your chance come soon enough.

Wow... tht was so interesting..Loved the post n ur blog.. U ll be seeing me around :)