When it comes to writing reviews, I have usually been moved to do so by works that in turn moved me .There’s something about a good new movie that makes you want to talk about it. But that is not why I am reviewing Sathyan Anthikad’s latest directorial venture “Ennum Eppozhum”,in fact it is just the opposite . Going by the mixed reviews the movie has been garnering so far, I felt it imperative to clear the air from my part. The only way in which the movie moved me was to make me want to make a move out of the cinema hall while waiting for the ordeal to get over. 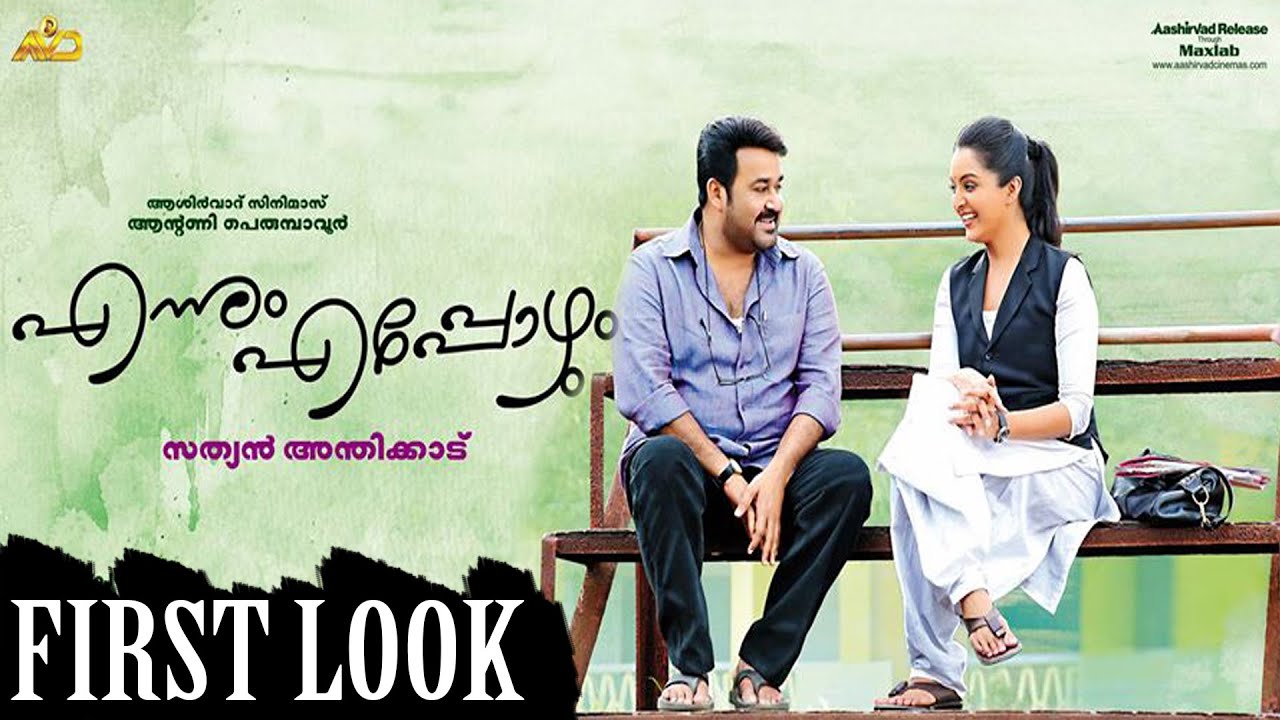 The movie has a wafer thin plot written by Ranjan Pramod based on a story by actor Raveendran , or so the wiki page says . A lazy reporter past his prime, professionally and personally, tries to get an interview with a new-age, up and coming female advocate. Both the lead actors, Mohan Lal and Manju Warrier, look the part quite effortlessly- delightfully in the case of the heroine and woefully in the other case. Much to the viewer’s dismay, both these talented actors have been reduced to playing themselves on screen.

Manju plays a socially responsible, hardworking and talented advocate who is a divorcee and mother to a seven year old girl child. If you are a fan of this talented actress and went to the movie just to catch her on screen like I did, you wouldn’t be disappointed, as she lights up the movie with her screen presence and gentle charisma. She is in her best shape and looks inspiringly beautiful in her role as a successful single mother. The credits end there as her role does not have much acting scope in terms of character depth or variety since Adv.Deepa is just like any other modern woman. Manju’s comeback in the dance field has been exploited to good length and even overused what with her dancing to a full length song and then again periodically ‘practising’ every now and then .These prolonging techniques had best been avoided.

Mohan Lal plays the slothful Vineeth N Pillai whose only reason for still having a reporter job is his late mother’s connections with the magazine’s senior management. In a bid to oust him from his job, the new kid on the block in the magazine’s owning fraternity gives him the job of getting an exclusive interview with Adv .Deepa, who gains overnight fame through her activist stand in protesting against potholed roads and getting civic bodies to promise quick action. Including contemporary news items in the story line is a staple in movies but this movie goes so far as to get the real Mr.Kouchoussep Chittilappilly to offer the heroine 5 lakhs amount as reward for her socially responsible stand which she turns down in turn . Comedy sequences from Lalettan falls flat and the chemistry between him and his comic sidekick, Gregory of Akkarakaazhchakal fame, does not have the desired impact. The scene where Lalettan is asked by his friends over a few drinks about his still unmarried status and his reply of not having found a woman with the qualities of his mother, a line repeated ad nauseam in Malayalam movies, reeks of  distasteful machismo. His supposedly touching statement to the heroine as the only woman he has seen possessing his mother’s virtues in the movie’s climax, fails to deliver the punch. It his high time Lalettan became weight conscious and did something about his looks or stopped making such frivolous statements to today’s heroines.

Music by Vidyasar and lyrics by Rafeeq Ahmed gets a good mention from me, especially the song ‘Malarvaka kombathu’, rendered in the enticing voices of P.Jayachandran and Rajalakshmy . Vijay Yesudas has sung another melody for the movie which is worth a mention too. Cinematography is fresh and sits well with the overall mood of the movie. Support roles done by Innocent, Lena and Gregory are all the usual stuff displayed time and again and goes with the plot line. Sathyan Anthikad, regretfully, has nothing new to offer and is no more guaranteed to make good movies going by the string of his latest movie outings.

Overall the movie is a onetime watch, worth catching on TV during the next festive season for this year’s Christmas if not for Onam; nothing worth spending multiplex movie watching expenses over. Our take away from this movie-going was the lovely caramel pop corn  that we munched on ,the taste and rich aroma of which still lingers fresh in memory . So let me wind up this review for now and go find out where I can find some more caramel pop corn!

PS: The opinions stated here are personal and does not reflect the general trend. I personally know people who found the movie “okay” and even “enjoyable”.

Posted by manoranjini at 8:56 PM

Email ThisBlogThis!Share to TwitterShare to FacebookShare to Pinterest
Labels: reviews

i liked the caramel pop corn part in the end...good going..

Ah yes. Sathyan Anthikad does seem to be repackaging old wine in old bottles, for quite some time now. I used to love his erstwhile movies, because he had a remarkably sensitive way of portraying the common man's ordeals and contemporary issues, with dollops of humour - of course. The movies he makes now lacks that kind of connect - maybe he's not in tandem with reality; or is unsuccessful in marrying his technique to modern times. Good review - I am guessing I'd feel the same, had I watched the movie :-)

I’m From Tamil Nadu, I like Malayalam Movies very much, in contrast I heard many Malayalam people like VIJAY, AJITH, SURYA, ALLU ARJUN. Tollywood is completely opposite to molly wood, whereas kolly wood is mixture of both the tolly wood and molly wood. Movies Made by Malayalam Industries are heart warming and life oriented, where you can at least learn something for your Life. I wish People from Malayalam film industry release their movies in Tamil with subtitles so that it will reach wider audience. Because artistic work should reach more people in the world. I used to read all the latest Kerala News in Malayalam From this site, check it , would be useful.